While artists and designers have discovered there’s no sharp distinction between “real” and “virtual” (aka the New Aesthetic), economists are still talking about “virtual”, even as the networks of computers they’re referring to are exposing the economic externalities the greed of the “first economy” is built on.

Bill Davidow wrote for the Atlantic 10 April 2012, How Computers Are Creating a Second Economy Without Workers,

“Twenty years ago, if you went into an airport

you would walk up to a counter and present paper tickets to a human being. That person would register you on a computer, notify the flight you’d arrived, and check your luggage in. All this was done by humans.”

Well, except for that part about “a computer”. And the flight computers in the airplane. And the FAA computers. And….

This is also true:

“Today, you walk into an airport and look for a machine.

You put in a frequent-flier card or credit card, and it takes just three or four seconds to get back a boarding pass, receipt, and luggage tag. What interests me is what happens in those three or four seconds. The moment the card goes in, you are starting a huge conversation conducted entirely among machines. Once your name is recognized, computers are checking your flight status with the airlines, your past travel history, your name with the TSA (and possibly also with the National Security Agency). They are checking your seat choice, your frequent-flier status, and your access to lounges.”

While Bruce Sterling can (rightly, I think) say that’s not AI, nonetheless it all happens without much human intervention. And pixelated images of airplanes don’t start to indicate what’s going on in there.

“Here’s the challenge: In the past, every million-dollar increase in economic output generated on the order of ten jobs. In the future, in the productive Second Economy, it may generate only one or two.”

have already been automated out of existence. That in itself is an issue, including the destruction of rural communities throughout the country and the world, and deep effects on the general culture and society, as Wendell Berry argued in 1996 in The Unsettling of America: Culture and Agriculture. We’ve learned to ignore all that by referring to “non-farm employment”.

These effects now include that the food supply is monopolized by a few giant agrochemical companies that are poisoning the planet in pursuit of profit. That’s not unrelated to Davidow’s point, since the efficiency required by Monsanto’s profit requires automated tractor equipment that use GPS positioning to cut on and off sprays at the edges of fields (without stopping that economic externality spray drift): more networks of computers cooperating with only minimal human intervention, with all the real profits going to big agro companies and to the banks that hold the mortgages on the farms and equipment.

Bertrand Russell went on about the same phenomenon in 1932 in In Praise of Idleness, in which he recommended going to a 4 hour workday, so that the remaining work would be widely distributed, instead of overworking some and leaving others destitute:

Suppose that, at a given moment, a certain number of people are engaged in the manufacture of pins. They make as many pins as the

world needs, working (say) eight hours a day. Someone makes an invention by which the same number of men can make twice as many pins: pins are already so cheap that hardly any more will be bought at a lower price. In a sensible world, everybody concerned in the manufacturing of pins would take to working four hours instead of eight, and everything else would go on as before. But in the actual world this would be thought demoralizing. The men still work eight hours, there are too many pins, some employers go bankrupt, and half the men previously concerned in making pins are thrown out of work. There is, in the end, just as much leisure as on the other plan, but half the men are totally idle while half are still overworked. In this way, it is insured that the unavoidable leisure shall cause misery all round instead of being a universal source of happiness. Can anything more insane be imagined?

Well, yes, more insane is the current world in which the employers get filthy rich by putting much of the work force out of work. 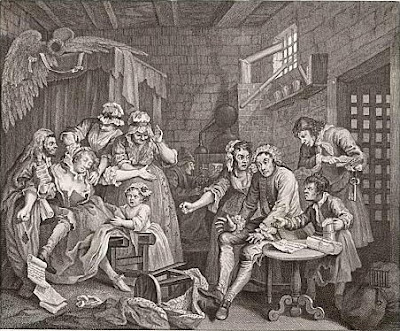 to the rich. In England, in the early nineteenth century, fifteen hours was the ordinary day’s work for a man; children sometimes did as much, and very commonly did twelve hours a day. When meddlesome busybodies suggested that perhaps these hours were rather long, they were told that work kept adults from drink and children from mischief. When I was a child, shortly after urban working men had acquired the vote, certain public holidays were established by law, to the great indignation of the upper classes. I remember hearing an old Duchess say: ‘What do the poor want with holidays? They ought to work.’ People nowadays are less frank, but the sentiment persists, and is the source of much of our economic confusion.

We’re going to have a lot of idleness as the economy becomes even more automated by computers and networks. But that doesn’t have to produce poverty and ignorance that shall swell the rich and grand.

We’re also going to have a lot more wealth. A sane economy would use that wealth to ensure that everyone has enough food, health care, and satisfying work that doesn’t take all day. Hey, we could even use it to encourage a lot of people to go back to growing local food, providing local employment, health, and community! Computers and networks are already helping with that, through assisting research on the agrochemical giants, research on how to grow diverse crops sustainably instead, and communications and publicity for locavores, such as Android locavore-locating app.

Out of the same networks of computers and the humans who use them, as they make it increasingly clear that there is no such thing as an economic externality in a world that greed can ever more readily destroy. What good will their gated communities and private islands do the rich when they have no air to breathe or water to drink? Long before then, a reaction may set in. It already is, in ways the rich don’t understand, such as the New Aesthetics.