Japanese broadband uptake as of March 2007: More impressive than raw numbers is the graph, which shows aDSL growing rapidly from 2001 to 2003, after which FTTH suddenly becomes the new growth broadband connection.

As of March 2007, merely 95% of all Japanese households had broadband, and 84% had ultra-highspeed broadband. Japanese government goals for 2010 are 100% and 90%, respectively. Ultra-highspeed seems to be defined as both up and down over 30Mbps.

Until now, FTTH has been the mainstream in terms of ultra-highspeed broadband, with upload and download speeds of over 30Mbps, but other wired and wireless technologies are aiming for technologies that will match if not overtake FTTH, and there will be a need for ongoing developments in broadband technology in terms of higher speed and larger volume to meet user needs.

Higher speed services in testing now include speeds faster than 1 Gbps, which would be around 300 times faster than what passes for broadband in the U.S. END_OF_DOCUMENT_TOKEN_TO_BE_REPLACED 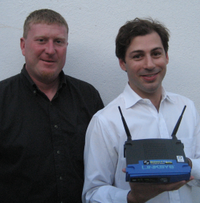 This works for local electric companies; why not for ISPs:

Some ISPs simply discourage end users from offering WiFi connections to neighbors; most explicitly rule it out in their terms of service. But a small Canadian ISP called Wireless Nomad actually requires it.

Nomad does things a little differently. The company is subscriber-owned, volunteer-run, and open-source friendly. It offers a neutral Internet connection with no bandwidth caps or throttling, and it makes a point of creating wireless access points at the end of each DSL connection that can be used, for free, by the public. Bell Canada this is not.

Sort of a local FON.

Why wait for the auction when there’s another way?

AT&T announced today that it has purchased 12MHz of spectrum in the prime 700MHz spectrum band from privately-held Aloha Partners for close to $2.5 billion. Aloha purchased the spectrum in Federal Communications Commission auctions held during 2001 and 2003, but hasn’t done much with the licenses since the auctions ended.

The licenses to the spectrum cover around 196 million residents of the US and 72 of the 100 largest metropolitan areas, including the ten largest markets in the US. AT&T isn’t divulging much in the way of specifics for the bandwidth, other than saying that the company will use it for voice, data, and video. “Aloha’s spectrum will enable AT&T to efficiently meet this growing demand and help our customers stay connected to their worlds,” said Forest Miller, AT&T’s group resident for corporate strategy and development.

And since Aloha got this batch of 700Mhz spectrum in a previous auction with no open access strings attached, AT&T can thumb its nose at Google about that. For the particular geographical locations that Aloha covers. 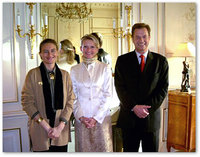 In the U.S., it’s difficult for a municipality to put up a wireless Internet service even if it’s a disaster zone and the telco hasn’t gotten its POTS service back up, because the duopoly doesn’t want the competition. Meanwhile, in France:

The municipality does have to demonstrate that there isn’t already a similar service, but given the “open networks” aspect, that shouldn’t be difficult. Could this have something to do with why France is ahead of the U.S. in Internet connectivity and speed?

Nowadays there are over a hundred projects, small and big. One famous one One famous one is the plan to do FttH in Hauts-de-Seine, the department chaired by Mr Sarkozy until he became President. Sarkozy was the man personally proprosing the FttH roll out in Hauts de Seine.

He points out that picture FCC Commisioner Tate and ARCEP Commissioner Gauthey have met, as in the picture. Perhaps soon we’ll get a U.S. president who might be influenced by French president Sarkozy on this subject. 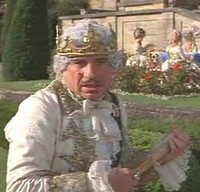 How are those merger conditions coming along?

Remember the story back in June about how AT&T had extremely quietly started offering $10 DSL as was required in its deal to buy BellSouth? The company was promoting many other, more expensive, DSL options, but the only way you could get the required $10 version was if you specifically knew to ask about it. Broadband Reports points to an interview from an Atlanta newspaper with AT&T CEO Randall Stephenson where he’s asked about the $10 DSL. The interviewer points out that no story about AT&T resulted in a more irate response from AT&T customers as its story about the hidden offer for $10 DSL, suggesting that this was a huge issue for AT&T customers. Stephenson’s response? First he denies that the company made it hard to find, and then he says that they’re not promoting it because customers don’t want it. This, despite the clear response from customers to the very newspaper who was conducting the interview. Then, he basically admits that the $10 DSL doesn’t work very well, saying that they don’t promote it because they don’t want to give customers a product that sucks. Of course, he says that as if it’s not his company that has quite a bit of control over whether or not the product sucks.

This is even though the AJC reporter introduced the question with:

Of all the things the AJC has written about AT&T lately, none has caused more reader irritation than AT&T’s $10 a month DSL offer, which was required by the Federal Communications Commission when you bought BellSouth.

The techdirt writer goes on to point out that this is what SBC used to do with naked broadband, too, i.e., dance around and do nothing. After all, without regulation or competition, it’s good to be king! 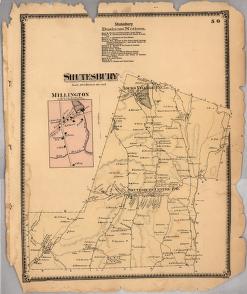 In the previous post, I quoted a paper as saying competition would promote lower prices. Here’s what the authors recommend to produce that competition:

Federal reform and additional state-specific reforms have focused on reforming “video franchising” laws to reduce barriers to entry and investment by new service providers. We commend such policies as likely to contribute to investment and competition in broadband services.

— The Effects of Broadband Deployment on Output and Employment: A Cross-sectional Analysis of U.S. Data, By Robert Crandall, William Lehr and Robert Litan, Brookings Institution, 2007

Here’s what some affected parties think about that:

Two years ago we profiled the rural Massachusetts towns of Shutesbury and Leverett, who have long been trying to get broadband from anyone — but aren’t deemed profitable to serve by Comcast or Verizon. While towns as close as 300 feet get service, these two towns are still waiting, though some have concocted home brew solutions. Locals tell us they were insulted when approached by Verizon to support “franchise reform,” which all but seals their fate by eliminating build out requirements.

It seems “franchise reform” may be one of those newspeak phrases like “tax relief” which is used to persuade those who will suffer to support something that will benefit those who propose it.

It’s enough to make you nostalgic for FDR and the REA.

Seven years ago, the neighborhood’s homeowners association, set up by the developer Van Metre Homes, inked an exclusive deal with OpenBand, a small Dulles firm, to provide Internet, cable and phone service to all 1,100 homes. Residents say they are now locked into an expensive, decades-long contract for second-rate services.

Erika Hodell-Cotti, who lives on Sunstone Court, says she cannot work from home because her Internet connection frequently fizzles out. The teenagers who live next door play online Xbox games at friends’ houses where speeds are faster. Dozens of neighbors have installed satellite dishes on their roofs and backyard decks, fed up with cable channels that sometimes dissolve into snowy static.

In Suburbs, Locked Into a High-Tech Lure, Fiber-Optic Service Disappoints Many, but Contracts Span Decades, By Kim Hart, Washington Post Staff Writer Monday, May 21, 2007; Page A01

The problem appears to be that the provider used a single technology and now has no incentive to upgrade. I suppose this is another example of how what Internet participants actually want is the Internet, not a specific delivery technology. A better contract, requiring the provider to at least keep up with prevailing standards, would have helped a lot.