Many good papers on aspects of universal service at the Benton Universal Service Project:

As Congress and the FCC put universal service reform at the top of its telecom policy agenda, the Benton Foundation is supporting a series of papers advancing a new vision for Universal Service — for making broadband as universal as telephone service is today and a pathway for retaking the lead as a broadband leader. This project outlines the policy rationale, the pathway forward, and the 12 key steps for advancing universal broadband and modernizing the universal service program for the information age.

Many of the authors of the papers are on a panel this afternoon at TPRC, including topicssuch as

Hm, maybe Verizon could learn from that one?

Here’s what happens when you have a telco thinking the Internet is subject to its internal policies and political predilictions:

But the company reversed course this morning, saying it had made a mistake.

“The decision to not allow text messaging on an important, though sensitive, public policy issue was incorrect, and we have fixed the process that led to this isolated incident,” Jeffrey Nelson, a company spokesman, said in a statement.

“It was an incorrect interpretation of a dusty internal policy,” Mr. Nelson said. “That policy, developed before text messaging protections such as spam filters adequately protected customers from unwanted messages, was designed to ward against communications such as anonymous hate messaging and adult materials sent to children.”

Mr. Nelson noted that text messaging is “harnessed by organizations and individuals communicating their diverse opinions about issues and topics” and said Verizon has “great respect for this free flow of ideas.”

Is the Internet a public network, or isn’t it? If it is, I don’t see why any ISP should be blocking messages based on content. (Spam is a different matter: spam is unsolicited.) There are various opinions as to what laws, if any, cover text messages. But the main point isn’t even legal. If the telco-provided network isn’t a public network, it’s not the Internet.

Every song and album on Amazon MP3 is available exclusively in the MP3 format without digital rights management (DRM) software. This means that Amazon MP3 customers are free to enjoy their music downloads using any hardware device, including PCs, Macs™, iPods™, Zunes™, Zens™, iPhones™, RAZRs™, and BlackBerrys™; organize their music using any music management application such as iTunes™ or Windows Media Player™; and burn songs to CDs.

Interesting how they didn’t mention Linux or Unix or any other free software platform.

Still, this is probably enough to keep Amazon from getting its own channel on the telco and cableco-planned closed Internet.

Here’s another view of what the telcos and cablecos have in mind for us, or, rather, what they want in our minds: approved content. This is substantially different from the Internet freedom we have today to look at whatever we want to and to publish our own content.

Get ready for the Amazon Channel or settle for Internet Base Service. END_OF_DOCUMENT_TOKEN_TO_BE_REPLACED

Apparently people have trouble imagining what a telco-packaged non-neutral Internet would look like. Think of cable TV. Look at AT&T’s Blue Room. Or look at this graphic, which apparently was originally drawn in May 2006.

Hey, this version doesn’t include Amazon or Craig’s List. So sorry; guess they didn’t pay for access. 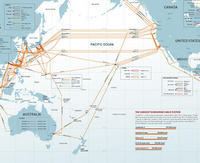 Google may be getting into international infrastructure as well as domestic:

Google is planning a multi-terabit undersea communications cable across the Pacific Ocean for launch in 2009, Communications Day has learned.

The Unity cable has been under development for several months, with a group of carriers and Google meeting for high-level talks on the plan in Sydney last week.

Google would not strictly confirm or deny the existence of the Unity plan today, with spokesman Barry Schnitt telling our North American correspondent Patrick Neighly that “Additional infrastructure for the Internet is good for users and there are a number of proposals to add a Pacific submarine cable. We’re not commenting on any of these plans.”

However, Communications Day understands that Unity would see Google join with other carriers to build a new multi-terabit cable. Google would get access to a fibre pair at build cost handing it a tremendous cost advantage over rivals such as MSN and Yahoo, and also potentially enabling it to peer with Asia ISPs behind their international gateways – considerably improving the affordability of Internet services across Asia Pacific.

Coyly refusing to confirm nor deny, Google has nonetheless left bread crumbs along trail of its ambition: END_OF_DOCUMENT_TOKEN_TO_BE_REPLACED 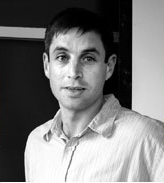 Steven Levitt points out there are other ways to measure the effects of a military action than listening to politicians or generals, and the Internet can promote the production of such measures, and the analysis of them by multiple parties. On several measures, M.I.T. professor Michael Greenstone finds results of the U.S. “surge” in Iraq to be mixed. Then he brings in another measure:

The most interesting part of Greenstone’s paper is his analysis of the pricing of Iraqi government debt. The Iraq government has issued bonds in the past. These entitle the owner of the bond to a stream of payments over a set period of time, but only if the government does not default on the loan. If Iraq completely implodes, it is highly unlikely that these bonds will be paid off. How much someone would pay for the rights to that stream of payments depends on their estimate of the probability that Iraq will implode.

The bond data, unlike the other sources he examines, tell a clear story: the financial markets say the surge is not working. Since the surge started, the market’s estimate of the likelihood of default by the Iraqi government has increased by 40 percent.

This kind of analysis seldom gets written for traditional channels because (2) there’s no academic incentive for it and (3) the only money in it is usually from special interests. Here’s the main point:

1. This paper shows how good economic analysis can contribute in a fundamental way to public policy. Anyone who reads Greenstone’s article will recognize that it is careful and thorough. It is even-handed and apolitical. It combines state-of-the-art data analysis techniques with economic logic (e.g., using market prices to draw conclusions about how things are going).

4. The internet can potentially solve both problems (2) and (3) above, leading to an increased supply of good, timely analysis. If people like Greenstone can immediately get their findings into the public debate through the internet, it gives a real purpose (not just an academic one) to doing the work. In addition, there are now online peer-reviewed academic journals that have greatly sped the time from submission to publication, potentially increasing the academic payoff to someone like Greenstone. With many respected economists now blogging, there is also a vehicle for these folks to weigh in on the quality of policy-related economic writings — like I am doing in this blog post.

If the Internet helps focus many eyes on bugs and make them shallow, why can’t it do the same with political and military actions?

Right now it can. Without net neutrality it wouldn’t be able to.

Two years ago the New York Times made its best marketing estimate of how to derive income from the web, and put many of its back stories beyond a paywall called TimeSelect, at $49.95/year or $7.95/month. Times change:

In addition to opening the entire site to all readers, The Times will also make available its archives from 1987 to the present without charge, as well as those from 1851 to 1922, which are in the public domain. There will be charges for some material from the period 1923 to 1986, and some will be free.

The Times said the project had met expectations, drawing 227,000 paying subscribers — out of 787,000 over all — and generating about $10 million a year in revenue.

“But our projections for growth on that paid subscriber base were low, compared to the growth of online advertising,” said Vivian L. Schiller, senior vice president and general manager of the site, NYTimes.com.

What changed, The Times said, was that many more readers started coming to the site from search engines and links on other sites instead of coming directly to NYTimes.com. These indirect readers, unable to get access to articles behind the pay wall and less likely to pay subscription fees than the more loyal direct users, were seen as opportunities for more page views and increased advertising revenue.

“What wasn’t anticipated was the explosion in how much of our traffic would be generated by Google, by Yahoo and some others,” Ms. Schiller said.

This is why it’s a bad idea to let the telcos and cablecos determine what we can see or do on the web. Nobody can predict what will work best, especially for deriving revenue.

Hm, this would also mean that the duopoly’s insistence on TV as the future of Internet revenue could be just as wrong for them as it is for the rest of us. 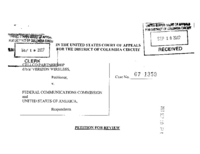 Well, even though the FCC only provided half-measures to open up the 700Mhz market, Verizon thinks that’s too much and is suing the FCC because it partly unlocked cellphones:

Verizon Wireless seeks judicial review on the grounds that the Report and Order exceeds the Commission’s authority under the Communications Act of 1934, as amended, 47 U.S.C. §§ 151, eg. seq., violates the United States Constitution, violates the Administrative Procedure Act, 5 U.S.C. § 701 et. seq., and is arbitrary capricious, unsupported by substantial evidence and otherwise contrary to law.

Curious how the burden of proof always seems to be on anybody but the telcos and cablecos. I mean, didn’t the FCC get the memo that it was only supposed to do anything if somebody proved market failure?

One sentence sums it up:

When I invented the Web, I didn’t have to ask anyone’s permission.

What is net neutrality?

Where you and I are any pair of participants on the Internet. END_OF_DOCUMENT_TOKEN_TO_BE_REPLACED