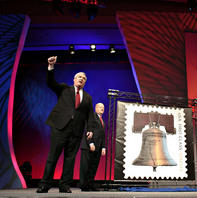 What’s the point of a free press if it can’t be delivered?

To the surprise of many independent publishers, in February the Postal Regulatory Commission (PRC), the body in charge of determining postal rates, rejected a rate-hike plan that was submitted by the U.S. Postal Service, the people in the business of delivering the mail for the past 215 years. This plan was widely understood to call for an approximate 12 percent increase that would have hit all publications more or less equally.

Instead the PRC adopted a revised version of an extremely complicated proposal submitted by media conglomerate Time Warner that included a number of possible discounts favoring the largest publishers.

Time Warner is the largest magazine publisher in the nation. To make up for the discounts and maintain their revenue targets, some magazines will have to pay a lot more than the 12 percent increase most had budgeted for. Research by McGraw-Hill, a magazine and book publisher, suggests many publications, particularly small and medium-circulation publications, could now be looking at immediate postal rate hikes well above 20 or 25 percent—thousands to hundreds of thousands of dollars in additional costs that will strain already tight budgets.

The PRC’s Time Warner plan was approved by the Postal Board of Governors in March. Only then did many small publishers, media and public interest activists, and even members of Congress learn of this radical rate change.

The littler guys now will be making editorial content decisions based on distance — historically, they had faced a flat fee no matter how far within the US the content traveled. That’s no longer the case.

That’s the story. It’s apparently a done deal. The smaller magazines don’t have the funds to reverse the decision. They’ve been out-lobbied for access to what should be a resource managed in the public interest: the US Mail.

But let’s connect a couple more dots. Correct me if I’m wrong, but I believe this is the same Time Warner that owns one of the largest cable Internet operations in the U.S. We already have a precedent of an obscure government rate-setting board (the Copyright Royalty Board) being used to squelch small players in the Internet, by pricing Internet radio out of its market. And now we see one of the Internet ISP duopoly using another such board (the Postal Board of Governors) to squelch small players in the paper communications network, aka the U.S. Postal Service.

If the Internet had had the kind of byzantine pricing scheme USPS just adopted, we never would have had the world wide web, Yahoo!, google, YouTube, or blogs. Imagine having to pay a special higher rate for blog posts than Time Warner pays to distribute bulk content.

The same Time Warner’s CEO has warned opponents that they should think of themselves as Gen. Custer at Little Big Horn. Should we trust this company to maintain net neutrality?