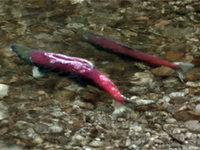 Just when you think it’s all telcos doing things dire for Internet freedom:

Comcast has warned broadband Internet customers across the country to curb their downloading or wind up on the curb.

The company has a bandwidth limitation that, if broken, can result in a 12-month suspension of service. The problem, according to customer complaints, is that the telecom giant refuses to reveal how much downloading is too much.

The company, which a few years ago advertised the service as “unlimited” has an “acceptable use policy” which enforces the invisible download limit.

And you have to wonder how long that AUP said that while Comcast was advertising “unlimited”.

This part is especially enlightening:

Douglas said the company shuts off people’s Internet if it affects the performance of their neighbors because often many people will share a connection on one data pipe.

So instead of fixing their bad topology, they penalize customers for using it.

Well, it’s a free market, right? Comcast users who don’t like it can switch to, er, if they’re lucky and have any choice at all, probably to whichever of Verizon or AT&T happens to be in their area. There couldn’t be any problems with those providers, could there?

Meanwhile, if you want to follow this Comcast controversy, here’s the Comcast Broadband dispute blog that one of the cast-offs started, presumably using his new DSL connection.It’s kind of like salmon organizing against a dam upstream.