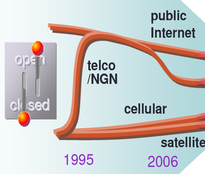 My, freedom is so degrading.

That last right next to the word “closed” on the figure. The presentation goes on to propose a solution that looks quite reminiscent of the end-to-end provisioning of circuit switching, like in the old copper telephone days.

In other words, engineers, sit down, shut up, and do what you’re told. Not just engineers, of course. The telcos know better. Seems like this was summarized towards the “freedom to degrade competitors” end of the spectrum:

OK, I suppose this is just one researcher’s (and the BT “re-feedback team”) unofficial remarks at one informal technical session. But it may also be what a major telco really thinks.