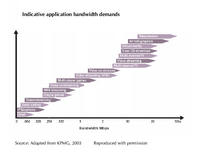 The figure shows new applications becoming possible as speeds increase, starting with electronic mail at the lowest speeds, through VoIP, also at a pretty low speed, and on up through multi-player games, video on demand, virtual reality, and telepresence. A few big ones seem to be missing, such as file transfer and the world wide web, but maybe those were available at too low speeds to mention. This point of speed enabling new applications is important, but even more so is what people do with those applications.

As Sharon Strover says, perhaps we should frame the discussion more in terms of competencies, rather than speeds. Or, as IIA says:

Business use of video conferencing is expected to increase as rising fuel prices, business continuity planning for possible avian flu pandemic or terrorist attack, environmental concerns and the provision of greater work/life balance for employees, begin to build pressure for workforce decentralisation. The Australian Telework Advisory Committee in its final report also recognised the productivity benefits that teleworking can deliver to business.11 These factors will see businesses require more broadband capacity and performance.

Overall, we anticipate that users will demand a mix of simultaneous or near simultaneous services to be accessible. As a guide, we would expect access services to be able to support concurrent uses of some or all of the following VoIP, gaming, multichannel streaming and video on demand (including HDTV quality), music, legitimate P2P file sharing, and browsing. The figure below illustrates the individual bandwidth requirements for a range of services.

Notice that many of these applications are participatory, and more intensely vivid methods of participations such as telepresence become available at higher speeds. However, electronic mail (one-to-one communication), mailing lists (one-to-many) and USENET newsgroups (many-to-many) were participatory at speeds most users would sniff at these days. Yet it takes higher speeds to do graphically-oriented multi-user roleplaying games such as World of Warcraft. Such games have hordes of paying users, especially in countries such as Korea with high access speeds. Participation breeds revenue, which fuels speed. Business and recreation aren’t the only uses of participation.

Participatory journalism thrives on the Internet, mapping everything from potholes to homicides, using sources ranging from walk-by observations to official government reports. Sure, you don’t need fast speeds to enter a few latlong coordinates, but you do need speed to use Google maps effectively, and that’s the application which has spawned the type of interactive mapping that drives such participatory journalism.

And this is all quite different from the old model radio, TV, film, newspaper, magazine, mass media model of producers and consumers. It’s much more like the original Internet model of peer-to-peer, in which every computer can be a client or a server and every user can be a participant, producing as well as consuming. To achieve that vision, every first-mile network must also be a participant, not a separate fiefdom censoring what comes across it.