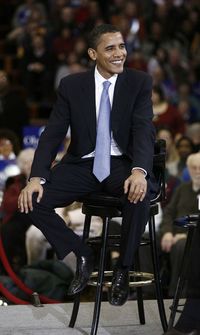 Back in June, John Edwards wrote a letter to the FCC back in June about the 700Mhz auction, in which he got it about the Internet and participation and opportunity.

Now Barack Obama answers a question from a former AT&T engineer, Joe Niederberger, that made it to the top of a video contest:

Would you make it a priority in your first year of office to re-instate Net Neutrality as the law of the land? And would you pledge to only appoint FCC commissioners that support open Internet principles like Net Neutrality?”

Facebook, MySpace and Google might not have been started if you did not have a level playing field for whoever has the best idea. And I want to maintain that basic principle in how the Internet functions. As president I’m going to make sure that [net neutrality] is the principle that my FCC commissioners are applying as we move forward.

Here’s the question and answer on video.