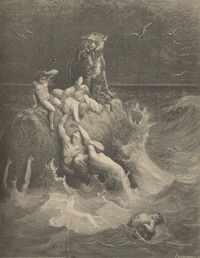 Control or profits? Which does Wall Street want?

Slashdot finds a post by Ars Technica spelling out how the Nemertes report saying the Internet may get clogged by increasing usage is just part of a political campaign to use increasing Internet traffic as an excuse to nuke net neutrality. A campaign going on since at least January, when the Discovery Institute’s Brett Swanson posted “The Coming Exaflood” in the Wall Street Journal. Beware the thousand thousand petabyes!

My favorite piece of the campaign is this one:

We should not fear the exaflood, however. It is key to the innovative new services and applications that appear almost daily. Consider the growing number of universities that are making course lectures available online, often in real time. Or telemedicine programs that are transmitting medical images and linking patients with distant specialists for real-time consultations.

— Bring On The Exaflood! Broadband Needs a Boost By Bruce Mehlman and Larry Irving Washington Post, Thursday, May 24, 2007; Page A31

No reason to fear the deluge! The telcos will protect you. As long as they don’t have that nasty net neutrality in the way, because then they’d have to build still bigger and faster networks, which would cost a lot more, and, besides, Wall Street wouldn’t invest the money.

Yet they’re only talking tens of billions of dollars in investment to build enough infrastructure to deal with this exaflood. And as Dave Isenberg points out, merely doubling the capacity would be cheaper than doing differential service offerings on just barely enough capacity. And as Internet usage goes up, ISPs will have to increase capacity anyway. Why not just keep adding capacity ahead of usage?

This isn’t really about technology, or even about networks. It’s about how the current ISP duopoly and its backers want to control information. Wall Street maybe needs to make up its mind which it wants more: control of information or profits. If it wants profits, it needs to be behind net neutrality.

One thought on “Exabyte Flood As Politics”