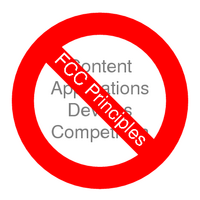 Duopoly apologist Scott Cleland spells out what everybody should have already known:

The petitions assume that the FCC’s policy of network neutrality principles have the legal and binding effect of formal FCC rules or law and that they trump all existing law and rules. This is preposterous.

Indeed, it is preposterous to think that the FCC ever meant to enforce its net neutrality “Policy Statement” of August 2005. Even if it did, the very way the four “principles” in that statement are worded, every one in terms of consumers, excludes the very existence of participatory services such as BitTorrent.

Cleland’s blog goes to great lengths to spell out what he considers common sense (which means he knows he doesn’t actually have a legal argument). Don’t be surprised if his items get parrotted by other anti-Internet-freedom blogs. And don’t be surprised if the FCC rules in favor of Comcast, even though any competent network engineer can tell you that there are ways to do network management that don’t involve faking reset packets, a technique that would be considered malicious denial of service if it came from any entity other than an ISP, not to mention Comcast’s BitTorrent stifling seems closer to the fraudulent promise of unlimited service that got Verizon fined by New York State.

[Clarified:] It’s not about network management. It’s about a few corporations and their political allies trying to stifle net neutrality and Internet freedom against the best interests of everyone else, including their own customers.