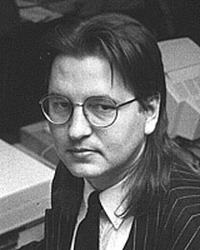 Bruce Sterling,, who has studied and practiced paper and online media his en tire career, and who also traveled to the USSR and then to Russia, says Prof. Clemons hasn’t imagined the worst:

(((Well, no — the “worst” would be that the publishers keep grinding out product, only it’s evil propaganda entirely subsidized by ultrawealthy moguls who have made themselves the only public source of news and culture. In other words, the commercial press collapses and it’s replaced by a classically fascist press. (Likely run on bailout money.) THAT’s the worst — with the possible exception of a furious proletarian upheaval that forces everyone to read grimy, poorly-printed copies of PRAVDA.)))

It would be easy to see a path from where we are now (half of U.S. media is owned by only five companies that actively suppress stories they don’t want to hear and promote stupid ones they do want) to Bruce’s scenario.