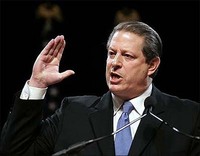 That last would appear to be the sort of trivialized, perhaps even infantilized, reaction Gore is lamenting. The big advantage of the Internet is you get not just a few zealots at extreme ends of an arbitrary spectrum: you get all the shadings and colors and depth you can absorb. And you can weave your own strands in this home-made tapestry. END_OF_DOCUMENT_TOKEN_TO_BE_REPLACED