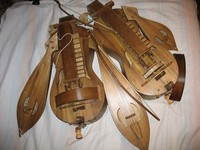 Fergie notes that a Russian court ruled for contract over copyright:

After the IFPI [International Federation of the Phonographic Industry] pressured credit card companies not to process payments to AllOfMP3.com, the company sued in a Russian court, claiming that its credit card processing contract had been broken illegally. Now, despite the fact that AllOfMP3 is no more, the company behind the service has apparently won a judgment against Visa’s Russian agent.

According to CNews, a Russian technology site, the backers of AllOfMP3 have just won their case against Rosbank, the Russian company that does much of Visa’s processing in that country. The court ruled that Visa can only break its contracts with merchants are when they are found guilty of breaking the law; breaking those contracts after talking to business groups like the IFPI was ruled illegal.

The ruling means that Visa may be forced to start processing payments to sites like AllTunes.com and MP3sparks, the AllOfMP3 replacement site, and Visa apparently does not plan to appeal.