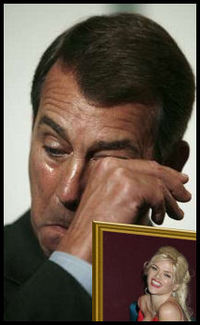 This is rather like crying foul because courts regulate contracts. I wonder how the free market would operate without them? The Internet free market in applications and services wouldn’t operate very well without net neutrality.

I don’t recall Boehner crying foul when Congress voted to regulate the Internet to require ISPs to hand over every bit (every email, phone call, web page, video, etc.) to the NSA and to legalize them having already done it when it was illegal. No free market talk from him then. Guess he didn’t think the Fourth Amendment was worth crying over, unlike Anna Nicole Smith.

And back in 1995, it was the duopoly ISPs demanding regulation from the FCC, because they wanted to squelch VoIP.

Now they want to squelch everybody else’s P2P and especially online video, except what they get a cut of. They think they can get away with it if the FCC stays out of the way, so now they are against regulation.

Their principles flip-flop kind of like Boehner’s, don’t they? Bunch of cry babies.