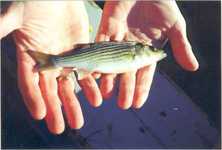 You may recall that the FCC at the last minute in 2006, after the elections and before the electees took office, agreed to some conditions on the merger of Bellsouth with AT&T. Among them was a $10/month DSL plan.

The merger commitment specifies that the plan had to be offered. That means to me that it has to be put forth as an option!!! (If there’s a fifty pound striped bass somewhere out there in the ocean, that’s not an offer of fish!)

So I don’t think AT&T is honoring its $10/month commitment.

This is the same $10/month service USA Today announced AT&T was developing back in January. Maybe they’ll just keep “developing” it until the 48 month time limit expires, or make it available to a few people and claim they’ve honored their commitment.This is what SBC used to do: claim availability if one person per ZIP code could get a service, and the FCC let them get away with that.

Do you think the FCC will investigate?