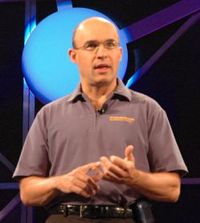 Apple has a reputation for “using its partners to its benefit”:

Blackberry Co-CEO Jim Balsillie sees the same thing happening with the recent launch of the iPhone.

Balsillie recently criticized Apple’s seeming willingness to commoditize the iPhone as an Apple product, rather than bringing AT&T Wireless in as an equal partner.

He also has issues with the iPhone being free of AT&T’s logo and with activation having to go through Apple’s iTunes music store rather than the AT&T Mobility site.“It’s a dangerous strategy,” says Balsillie.

“It’s a tremendous amount of control. And the more control of the platform that goes out of the carrier, the more they shift into a commodity pipe.”

Meanwhile, AT&T is still locking the customer into a 2 year contract, even though the customer is paying full price for the iPhone, unlike most other phones AT&T sells. So it would appear AT&T is using Apple to gain AT&T customers.

And maybe Apple didn’t want AT&T as a full partner because Apple perhaps is preparing to have iPhone work on other networks, as well? That would be a good thing.