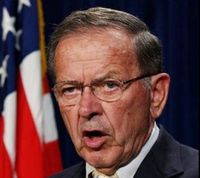 The regulatorium in action:

A decade-old telephone tax intended to help bring affordable service to rural areas has instead turned into something quite different: a bottomless and politically protected well of cash for cell phone companies that do big business in rural America.

Over the past four years, there’s been nearly a tenfold increase in government subsidies paid to a handful of so-called “competitive” providers — cellular phone companies paid by the fund to offer service in rural areas where an existing carrier already receives a subsidy.

The Universal Service Fund has collected $44 billion over its 10-year lifetime from a surcharge on the phone bills of nearly every American.

Regulators and lawmakers have long viewed the fund as inherently flawed. Even a member of the federalstate board that runs the program calls it “bizarre.” But efforts to change it have been derailed repeatedly by companies that benefit from the largess, and by supporters in Congress who represent sparsely populated states.

The article goes on to say wireless telephone companies benefit the most because they can connect rural customers at much less cost than landline telcos can. But that’s not all.

This is my favorite part:

If the customer opts to drop his land line and keep his cellular phone (the goal of competition), the persubscriber subsidy for the land line carrier actually goes up, keeping the overall subsidy unchanged.

Yet FCC and FTC do nothing, because nobody has demonstrated “market failure” and senators from a few small states oppose any change. Which senators?

Why, Mr. Tubes, himself, Ted Stevens! I wonder how that fisheries subsidies investigation is going?

Kevin Martin, FCC Chairman, claims to want to do something to fix the situation:

Martin has been pushing a “reverse auction” approach that he says would accomplish that. Potential providers would bid against one another to offer a set of services, with the low bidder winning the subsidy. An auction would end the inefficient practice of subsidizing multiple carriers in a single rural area, he argues.

Alltel Communications Corp. has indicated it would support a reverse-auction trial. The company would also support a separate fund for wireless services. Verizon Communications is a major proponent of the concept.

But Martin acknowledged the idea hasn’t yet caught on among lawmakers. “I’m always optimistic,” he said.

That all sounds good; I’ll believe it when I see the FCC actually implements such a change, and when such an auction isn’t gamed in favor of the incumbents, unlike the 700Mhz auction.