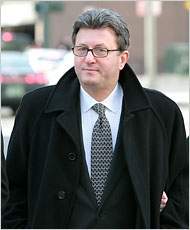 This case will forever be murky if retroactive telecom immunity for participating in illegal wiretapping passes, yet it has already thrown some light on some of the murkiest areas of government-corporate interaction.

Former Qwest CEO Joseph P. Nacchio, who has been convicted of insider trading for selling stock while Qwest’s stock price was tanking, claims he had reason to believe Qwest would get lucrative government contracts, and that Qwest was denied them because he refused to participate in an illegal program. When this happened is very interesting:

The phone company Qwest Communications refused a proposal from the National Security Agency that the company’s lawyers considered illegal in February 2001, nearly seven months before the terrorist attacks on Sept. 11, the former head of the company contends in newly unsealed court filings.

So if Nacchio is right, massive wiretapping by the current U.S. administration didn’t start as part of the “War on Terror”; it must have started for some other reason.

The best the prosecution has been able to come up with is:

However, prosecutors noted that Qwest was a part of an industry partnership called the Eagle Alliance that was created in 2000 to bid on work to revamp and improve the NSA’s internal systems and that Qwest was able to participate in some of the contracts. Much of the filings between Nacchio’s attorneys and the government have been redacted because of national security issues. It also was unclear exactly how much money would come or did come to Qwest from government contracts.

Participation as part of a partnership is a bit different from direct bidding. And those massively redacted filings leave plenty of room for Nacchio to be right.

Plus the National Association of Criminal Defense Lawyers says the judge in Nacchio’s original trial unfairly barred a defense expert witness while allowing two similar ones for the prosecution, and to let the conviction stand would

“create an uneven playing field, especially in complex criminal trials such as white-collar cases, in which experts are increasingly important”

Meanwhile, what isn’t redacted shows a number of things:

(1) The cooperation between the various military/intelligence branches of the Federal Government — particularly the Pentagon and the NSA — and the private telecommunications corporations is extraordinary and endless. They really are, in every respect, virtually indistinguishable.

(2) We know so little about what they were doing and are doing. The term “we” includes not only American citizens generally, but the Congress as well. All of this takes place completely in the dark, in total secrecy, with no oversight and no checks.

That telcos and government cooperate closely is not news. That they’ve apparently been up to illegal activities, and that they started earlier than the supposed impetus for them, and that the administration and members of Congress are trying to pass legislation that would cover it all up: that’s news.

It also could have something to do with why the current administration doesn’t want real Internet access competition: with real competition, somebody like Nacchio could refuse to participate in unsavory programs and get away with it. Then the government might not have blanket coverage of every online communication.

While the U.S. plays cold-war-era cloak-and-dagger telecom games, other countries such as Japan continue to pull farther ahead of the U.S. in broadband uptake, speeds, and applications.