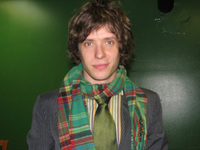 For some parallel examples: there are only two guitar companies who make most of the guitars sold in America, but they don’t control what we play on those guitars. Whether we use a Mac or a PC doesn’t govern what we can make with our computers. The telephone company doesn’t get to decide what we discuss over our phone lines. It would be absurd to let the handful of companies who connect us to the Internet determine what we can do online. Congress needs to establish basic ground rules for an open Internet, just as common carriage laws did for the phone system.

It would be absurd, no? Basic ground rules: OK, go!

The Internet, for now, is the type of place where my band’s homemade videos find a wider audience than the industry’s million-dollar productions. A good idea is still more important than deep pockets. If network providers are allowed to build the next generation of the Net as a pay-to-play system, we will all pay the price.

And that’s what the duopoly wants: we all pay and they profit. Is that what we want? Or do we want the Internet to be their (and our) CBGB?