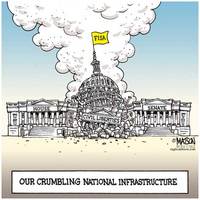 Larry Lessig points out that for the first time in history Congress’ job performance is rated (by Rasmussen) in single digits: 9%. Some of his commenters think that has something to do with the recent FISA bill, and others think that’s just a minority concern.

Three quarters of the American people and even a majority of Republicans oppose Bush’s warrantless wiretaps. Two thirds oppose warrantless wiretaps even for communications between U.S. citizens and overseas persons, and almost 2/3 oppose immunity for telcos. Aome people call that a minority. I don’t think that word means what they think it means.

Instead of standing up to Bush as the Constitution requires, Congress capitulated and gave the worst president in history still more powers to spy on the people. And the people do know about it:

Is the FISA bill the only reason Congress’s numbers tanked? Nope, but I don’t think it’s coincidence that they dropped immediately after the Senate passed that bill.

Why isn’t Larry Lessig working to convince Obama he was wrong and getting him to fix it, instead of trying to put lipstick on that pig of a bill?

One thought on “Congress at 9% Job Approval: Why Is Lessig Putting Lipstick on the FISA Pig?”