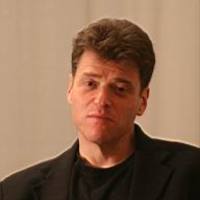 I was going to say you have to admire Andrew Keen for finding a contrarian perspective and mining it for all it’s worth. But this latest missive from him seems all too desperate.

Can Obama’s plan for universal broadband turn the recession into a political nightmare resembling the 1930s? Yes, it can, writes the author of the controversial book, The Cult of the Amateur.

Imagine if today’s radically unregulated Internet, with its absence of fact checkers and editorial gatekeepers, had existed back then. Imagine that universal broadband had been available to enable the unemployed to read the latest conspiracy theories about the Great Crash on the blogosphere. Imagine the FDR-baiting, Hitler-loving Father Charles Coughlin, equipped with his “personalized” YouTube channel, able, at a click of a button, to distribute his racist message to the suffering masses. Or imagine a marketing genius like the Nazi chief propagandist Josef Goebbels managing a viral social network of anti-Semites which could coordinate local meet-ups to assault Jews and Communists.

Like we don’t already have xenophobic propaganda on talk radio, Fox News, Lou Dobbs on CNN, etc. Rush Limbaugh already has his personalized TV show channel, as does Bill O’Reilly. If that’s what gatekeepers bring us, bring on the Internet.

With net neutrality, please. As in what Larry Lessig says Obama plans to require:

the terms offered one website or company are no better or worse than those offered anyone else.

That way we can keep free speech on the Internet, even if it doesn’t exist on TV or radio. What Keen hates most about the Internet is exactly what is its greatest strength: it is not a broadcast medium. It is a participatory medium, in which everyone can publish and everyone can select what to read or view. For example, I realize that I’m giving Keen’s doleful visage a tiny amount of publicity by posting this, but hey, it’s better to have weirdly wrongheaded stuff like this out there where everybody can see it and rebut it than having it festering in the darkness.

“I know no safe depositary of the ultimate powers of the society but the people themselves; and if we think them not enlightened enough to exercise their control with a wholesome discretion, the remedy is not to take it from them but to inform their discretion by education. This is the true corrective of abuses of constitutional power.”

On this I’ll go with Jefferson rather than Keen.

Here’s a good test for the new U.S. Executive: to recognize that steady pragmatism means radical change, starting with the FCC:

The solution here is not tinkering. You can’t fix DNA. You have to bury it. President Obama should get Congress to shut down the FCC and similar vestigial regulators, which put stability and special interests above the public good. In their place, Congress should create something we could call the Innovation Environment Protection Agency (iEPA), charged with a simple founding mission: “minimal intervention to maximize innovation.” The iEPA’s core purpose would be to protect innovation from its two historical enemies—excessive government favors, and excessive private monopoly power.

—Reboot the FCC, We’ll stifle the Skypes and YouTubes of the future if we don’t demolish the regulators that oversee our digital pipelines. By Lawrence Lessig, Newsweek Web Exclusive, 23 Dec 2008

Lessig gets the connection with his old topic of intellectual property and copyright. Those are monopolies granted by the federal government, and they have been abused by the monopoly holders just like the holders of communication monopolies: END_OF_DOCUMENT_TOKEN_TO_BE_REPLACED
Here’s a good backgrounder video on where the Internet came from and where it may be going: Humanity Lobotomy. See especially the part by Larry Lessig about how printing presses in the early days cost about $10,000 in 2007 dollars, and lots of people had one and published books and pamphlets.

What did they invent? END_OF_DOCUMENT_TOKEN_TO_BE_REPLACED